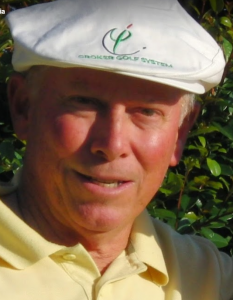 Book a Lesson With Peter Croker

For the past 45 years Peter Croker has dedicated his life to understanding the great game of golf, firstly as a touring professional and then as a PGA golf coach.

His students have included prime ministers, golfing greats and multiple PGA Teachers of the Year.

He has also spent time with Ben Hogan, Tom Tomasello, Ben Doyle, Martin Chuck, Arnold Palmer and many others.

Peter has written three books, appeared on the cover of Golf Digest as well as writing numerous coaching articles for numerous golf magazines and publications.  He has also spent many thousands of hours studying under his mentors, sometimes questioning their methods and delving deeper when needed.

For the past 25 years, he has been developing what is now known as the Croker Golf System.

It has been the culmination of his entire life’s work and extensive teaching knowledge.

Peter would love to have you as his next student.

To Book a Lesson with Peter Croker, please SMS Peter on +61415292549 with your cell # – email & Time Zone so Peter can call you to discuss your lesson/coaching requirements and book a convenient time for your lesson.