In this week’s Croker Golf Weekly we present the Swing Analysis of Andrew Landry, Lee Westwood and Gaby Lopez, a Lesson of the Week on the Illusion of the Late Hit, and more.

THE “WHY” and “HOW” to become Your Own Best Teacher/Coach

To All Students and Teacher/Coaches of Golf,

Firstly Happy New Year and may “Duplication become a Dream Come True” for 2020 and beyond!

Firstly I believe every person who plays golf MUST become a great “Teacher/Coach of Golf” as the first person we need to “teach/coach” is ourselves if we want to demonstrate competence in front of anyone we expect to “teach/coach” ourselves. After all, if we cannot do it, we do not know it!

ARE YOU SERIOUS ABOUT IMPROVING YOURSELF?

The dilemma for the serious Golf Teacher/Coach is that 99.99% of all golf students are not serious about a comprehensive understanding of the Mechanics or the Mind Game or any other component of the golf swing and game, therefore as a “Teacher/Coach” we need to “dumb it down” for the masses. The problem here is that for the lifetime Professional Golf Teacher/Coach is: Where do we go to get the full bottle of knowledge for ourselves?

That has been my lifetime “search and discovery” mission and finally, we have something super valuable to share. Following is a sample from the “A to B – Your One Drill to Better Golf” program which was delivered over 8 x 1-hour Webinars with a FREE Introductory Webinar – https://vimeo.com/user14583831/revi…utm_campaign=Great+to+see+you+want+to+improve

Lesson of the Week

The Driver and the Illusion of the Late Hit

A Success Story from Steve Cottingham, an A to B Program Golf Instructor

In 1995 I was lucky enough to come across an Australian Teacher “ Peter Croker”, who made a huge impact on my understanding of the mechanics of the golf swing, as well as teaching me not only “what” to teach but “how” to teach. I have no doubt that without Peters’s help, I would never have been able to assist so many golfers here in South Africa, but also in the many countries, I was fortunate enough to teach in.

More than 1,000 Golf Instructors worldwide have been positively influenced by the Croker Golf System and to this date, Peter is the only Australian Golf Instructor/Coach to have been given the honour of a cover story in Golf Digest Magazine, USA. His “A to B” Concept – “Dispelling the “Late Hit” Illusion” and “How to make Better Compression on the golf ball” was the reason over the years since 1992 when he first uncovered this “Paradigm Shift” in Golf Instruction (The PUSH CONCEPT and EDUCATED HANDS as THE SOURCE OF MOTION), he has continued to expand and refine his knowledge regarding the golf swing and how to best learn, teach, and play this game for a lifetime.

During this time, Peter has given lessons in the “A to B Program” to many winners on the PGA Tours of the world – Arnold Palmer, Peter Thomson, David Graham, Wayne Grady, Ian Baker-Finch, Seve Ballesteros, Vijay Singh, Mark Brooks, Simon Owen, Curtis Strange, Jim Ferree, Roco Mediate, Peter Senior, and others. Without exception, they all improved their compression on the golf ball within a very short amount of time during their first lesson. The same can happen for you!

Swings of the Week


How to Book a Lesson with Peter Croker or Chris Beckett

Peter and Chris are available for lessons in Victoria and Queensland respectively. Click for Details 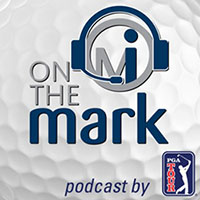 Mark Immelman from on his PGA popular Golf Podcast ‘On the Mark’ this week interviewed Peter Croker- listen to the full interview below.

For over 45 years Peter Croker has dedicated his life to understanding the game of golf, first as a Touring Professional and then as a PGA instructor and coach. He has spent time with some of the game’s greats like Ben Hogan, Peter Thomson and Greg Norman. His students have included Heads of State, legends of golf and multiple PGA Teachers of the Year. Crocker joins ‘On the Mark’ to share his experiences, his approach to the golf swing and his opinions on what great ball-strikers do. He also shares tips and drills you can employ to improve your ball-striking.

We received the Cover Story in Golf Digest USA and Worldwide in 1995 following our introduction of a “paradigm shift” in the way to hit a golf ball with solid compression and long and straight to its target. The added benefit is that it took much-needed stress off the back and other body parts in the process.  Today we have added the practice of Qi Gong as delivered by Joe Pinella to our Golf Learning and Training Practice. I have been doing a daily practice of specific Qi Gong Exercises with the express interest in removing pain from 2 specific areas in my body

Neither of these injuries was golf-related but occurred in the gym when lifting weights in Cross Fit sessions. After 85 days of daily practice, I can now report a huge improvement in both areas where I was in pain that restricted my enjoyment in hitting a golf ball and playing golf Qi Gong is the grandfather to Tai Chi and many other Eastern Practices for body and mind. I have cured a chronic pain in my lower leg (could not bend down to tee the ball up from my right leg for over 1 year. Many attempts to heal the problem leg had failed – then came Joe Pinella and his Qi Gong Practice. He was a quadriplegic after a car accident at 42 and confined to a wheelchair by Western Medicine Standards. At 71 he teaches patients to remove pain from their bodies.and is highly successful.  After 77 days of doing the exercises, I am pain-free! —  https://crokergolfsystem.com/qi-golf/ I will share some thoughts and videos here and hope you have the interest and time to view them. My Blog: –https://petercrokerblog.com/2019/03/27/why-should-control-trump-power-and-consistency/ Qi Gong Videos Please check out these short videos from Joe Pinella to gain an insight into Qi Gong and how it integrates so well with the Drills of the Croker Golf System. Please watch this one first as it sets the scene for the journey ahead. 1 Piece of Paper – https://www.balancedlifeteam.com/one-piece-of-paper?cid=0e2294d6-6da1-48d6-9979-7fc8eb06d250

Best Wishes, Peter PS: Please get back to me with your feedback – it will be greatly appreciated.

If you have any questions please ring me directly on +61415292549 to have your question answered. Competence leads to Confidence, and our aim is to help you build that Competence I hope you gain much for your game from these insights from the Master Coaching Academy, Croker Golf System, and my journey in golf since 1961 starting as a caddy at Royal Melbourne. Great Golfing and Enjoy the Hit!